A mysterious blob of gold by the shore of the frozen Gulf of Bothnia. What could it be?

Ten years old Konsta Lahnakoski donned his warmest clothes against the freezing February weather and strode out into the snow to investigate. The object was a half-inflated balloon – and on the balloon were some words: Almond Family Pubs and the internet address of the Stockport company.

The balloon had sailed up, up and away for 1,700 miles – the equivalent of a seven-hour flight in a plane – from Stockport to the west coast of the gulf – the northern extension of the Baltic Sea separating Finland from Sweden.

“My son found your pub’s balloon in Merikarvia Kasala, Finland. It was lying on our summer house’s beach. We checked out your website and it looks a great place!”

In a later email she added: “The pictures were taken by my father Ari Ahola. My son hopes that some day he can visit there and see your pubs.”

Kate Evans, marketing manager of the pub company which runs the Hesketh Tavern in Cheadle Hulme, Three Bears in Hazel Grove,  Puss In Boots in Offerton, Spread Eagle in Romiley and the Fletcher’s Arms in Denton, wrote back: “Please do let us know if you’re ever in the UK and in the area. We’d love to have you at the pubs. It would be really lovely to meet you, your son and your family.”

She explained: “The balloons are to make our customers feel welcome; there’s nothing nicer than seeing a little child walking out with one, chuffed as he’s got a balloon in his hand that a waitress has personally given him. It gives us a personal touch with birthdays and family get-togethers. It’s amazing that this one turned up not far from the Arctic Circle, but there’s no way of telling who launched it or from which pub it came from.”

The pub company’s chairman, Doug Almond, who checks daily to make sure staff are blowing up enough balloons to keep his young clientelehappy, said: “If I’d known one would get so close to Lapland I’d have attached a message to Santa Claus.” 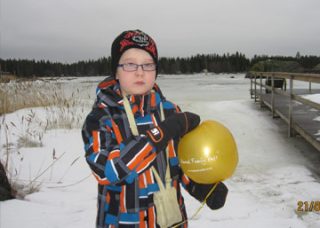